This post was inspired by a very interesting paper on Bayes factors: Workflow Techniques for the Robust Use of Bayes Factors by Schad, Nicenboim, Bürkner, Betancourt and Vasishth. I would specifically recommend it for its introduction into what actually is a hypothesis in the Bayesian context and insights into what Bayes factors are.

I wrote this post test my understanding of the material - the logic of Bayes factors implies that there are multiple ways to compute the same Bayes factor, each providing a somewhat different intuition on how to interpret them. So we’ll see how we can compute the Bayes factor using a black-box ready-made package, then get the same number analytically via prior predictive density and the get the same number by writing a “supermodel” that includes both the individual models we are comparing.

We’ll do less math and theory here, anyone who prefers math first, examples later or wants a deeper dive into the theory should start by reading the paper.

We will fit a few models with the newer R interface for Stan CmdStanR and with brms.

We will keep stuff very simple. Our first contestant, the humble null model a.k.a. \(\mathcal{M}_1\) will be that the \(K\) data points are independent draws from a standard normal distribution, i.e.:

The null model has faced a lot of rejection in their whole life, but has kept its spirit up despite all the adversity. But will it be enough?

The challenger will be the daring intercept model a.k.a. the destroyer of souls a.k.a. \(\mathcal{M}_2\) that posits that there is an unknown, almost surely non-zero mean of the normal distribution, i.e.:

The corresponding R code would be:

This comparison is basically the Bayesian alternative of a single sample t-test with fixed variance - so very simple indeed.

Finally let’s prepare some data for our contestants to chew on:

We will start by where most users probably start: invoking a statistical package to compute the Bayes factor. Here we will use the hypothesis function from brms which uses the Savage-Dickey method under the hood.

For this, we note that the null model is just a special case of the intercept model, destroyer of suns. So let us fit this model (\(\mathcal{M}_2\)) in brms. We will be using a lot of samples to reduce estimator error as Bayes factors can be quite sensitive.

Hypothesis then gives us two numbers, the Bayes factor of null over intercept (\(BF_{12}\)), a.k.a. evidence ratio and the posterior probability that null model generated the data \(P(\mathcal{M}_1 | \mathbf{y})\):

Those two qunatities happen to share a pretty straightforward relationship, given the prior probabilities of the individual models \(P(\mathcal{M}_1)\), \(P(\mathcal{M}_2)\) i.e.:

The Bayes factor might look a bit like a magic number, so let us demystify it with two more transparent approaches that give us the same Bayes factor.

One way to define Bayes factor is as the ratio of evidence i.e.:

Where “evidence” is exactly the prior density of the data after integrating out all the parameters. Since we have chosen very simple models, there is an analytic formula for evidence for both models.

As is usually done for numerical stability, we will primarily operate on the log scale. Computing the evidence for the null model is straightforward - there are no parameters to integrate out, so we can directly compute:

where \(\mathbf{\Sigma} = \mathbf{\Sigma_a} + \mathbf{\Sigma_e}\). With that we can compute the evidence for the intercept model, the harbinger of sorrow, \(P(\mathbf{y} | \mathcal{M}_2)\) as the corresponding multivariate normal density:

The Bayes factor is then simply the ratio of the evidence and we can use the BF to compute the posterior probability of the null model, assuming once again uniform prior.

We see the results happen to match pretty closely with the value obtained via brms. The difference can be attributed to sampling error in the brms computation.

What to make of this?

The perspective via prior predictive distribution lays bare why the Bayes factor is so sensitive to choice of priors - priors are quite literally the only thing that matters. We may also note that in computing the Bayes factor we decide to not use the data to inform the parameters of the model. This might be desirable for people who really fear “double dipping” - it makes some sense to test two competing hypothesis without letting the data inform either of the models. But it IMHO only makes sense when your hypotheses are precise enough (i.e. have narrow priors) that you don’t really need additional data to constrain them.

If your priors are wide and your hypotheses imprecise, Bayes factor may not give you anything useful (as is neatly shown in the Schad et al. paper, which you should read).

A third perspective is provided by imagining a “supermodel” combining our two contestants, i.e.:

Before showing how to do this in Stan, we can use JAGS to implement this model very directly, if not very efficiently:

We once again see a good agreement.

But we obviously want to do this in Stan. But Stan doesn’t handle discrete parameters you say? This can be overcome!

Warning: I had a lot of trouble thinking clearly about the rest of this section, so it is possible, there are mistakes or stuff is confusing. Please let me know, if you find the reasoning problematic/unclear/unconvincing.

The important point is called marginalization and there is a neat intro to it in the preprint for the rater package. More discussion and examples are in the Stan User’s guide. The point is that we can express the unnormalized density \(p(\alpha, \mathbf{y})\) as:

So let us fit the model:

No warnings, rhat and ess look good. Now, let’s extract the partial likelihoods and combine them into the BMA weight:

Viewing Bayes factors as derived from posterior probabilities of an index over candidate models (\(z\) in our case), puts a different angle on the distinction between \(\mathcal{M}\)-closed scenarios (the true model is among the models we compare) and \(\mathcal{M}\)-open / \(\mathcal{M}\)-complete where this is not the case.

If we treat the model selection as fitting the super model with the candidates as submodels, being in an \(\mathcal{M}\)-open scenario simply means that the super model is misspecified. Unfortunately, as discussed above, Bayes factors can be very sensitive to both prior and likelihood specification, where other approaches, e.g. approximate leave-one-out cross validation with loo is usually less sensitive to priors and less often overconfident in face of misspecifaction (see e.g. Using Stacking to Average Bayesian Predictive Distributions by Yao et al. for more discussion).

But we have many good ways to detect model misspecification, including prior and posterior predictive checks and other steps outlined in the Bayesian workflow preprint. So it would be interesting to test whether there is something to be gained by running prior and posterior predictive checks (or other diagnostics), not only for the component models, but for the “supermodel” implied by the selection scheme. But I’ll that to people who actually want to use Bayes factors :-D.

I’ll further note that I tried to implemented a supermodel with two realistic models and it appears that such supermodels can be challenging to fit (my impression is that the problem is primarily in initialization, but I didn’t investigate thoroughly).

Above, we computed the Bayes factors only for one dataset, so you might not be convinced that the agreement holds for any dataset. So here we’ll encapsulate the code in a few functions and evaluate a bit larger sample.

We note that some Bayes factors - exclusively those computed by the unmarginalized JAGS model are 0. This is unsurprising, as the 10000-iteration JAGS model loses ability to capture very low null probabilities and hence low Bayes factors - looking at the analytically computed Bayes factors of those problematic results they are invariably very low.

We can now plot the results of the various Monte carlo methods against the analytical results: 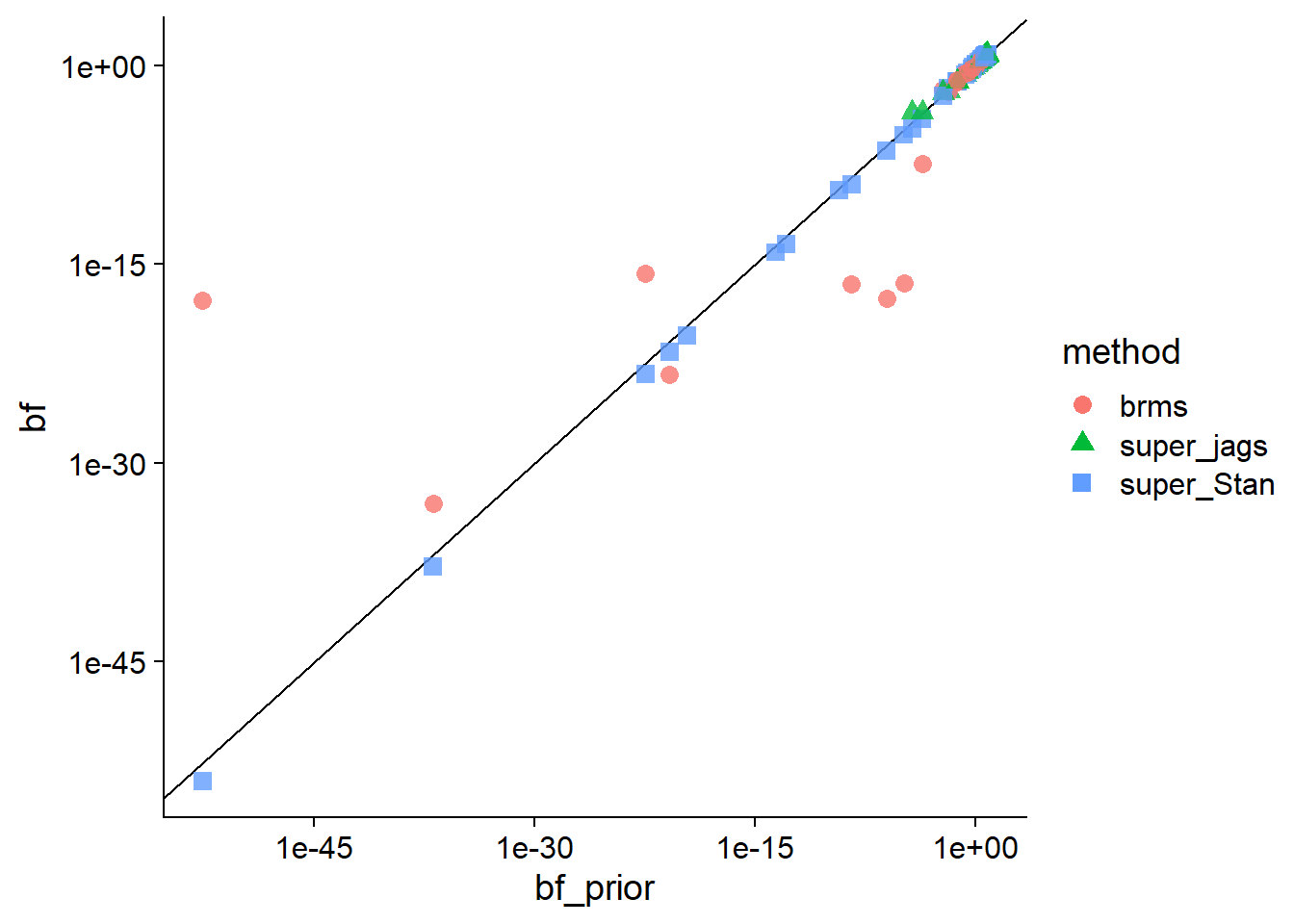 We immediately see that only the marginalized Stan model keeps high agreement for the very low Bayes factors (yay marginalization!).

We can also zoom in on the upper-right area, where we see pretty good agreement between all methods. 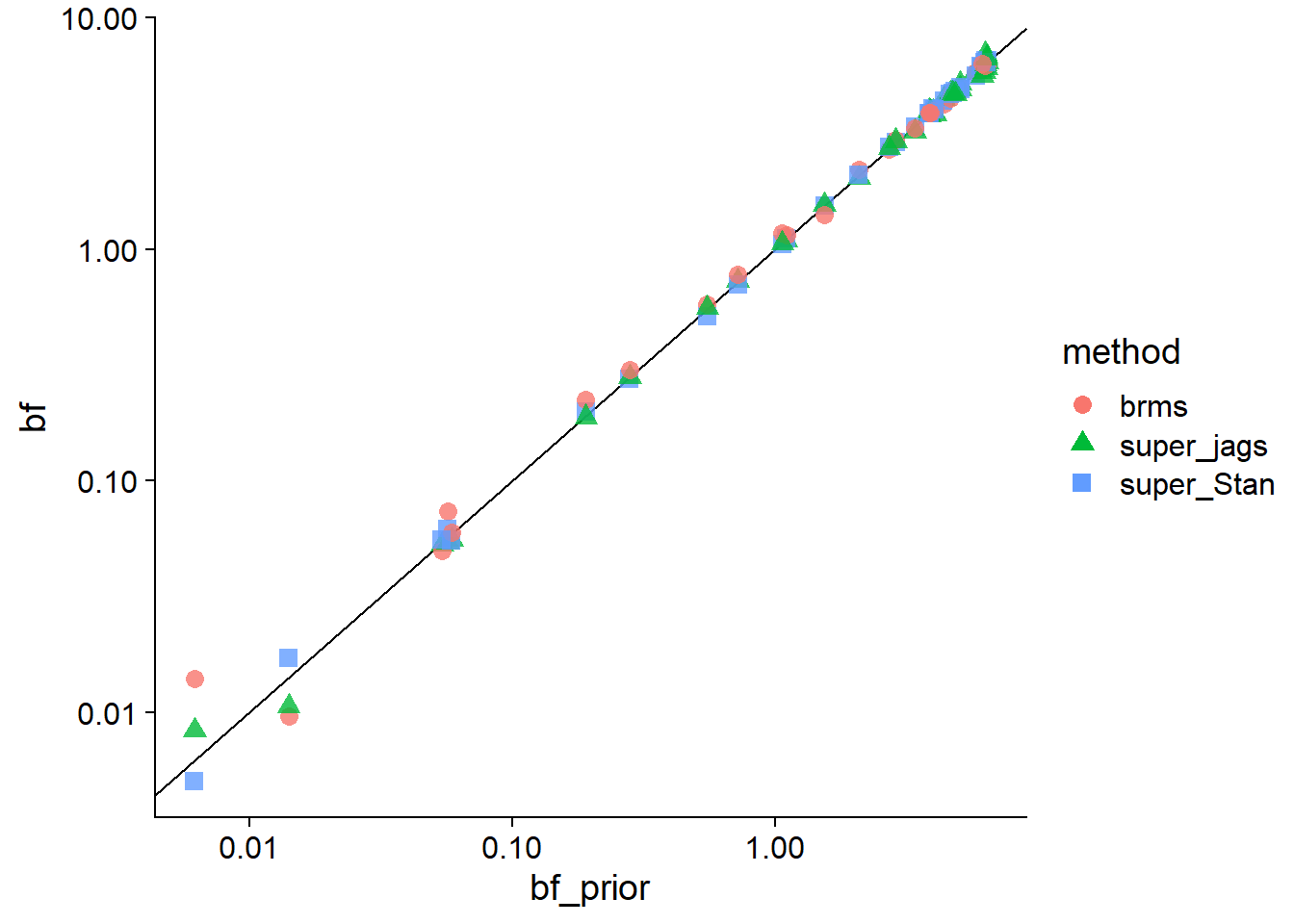 Following the method outline by Schad et al. we also check the calibration of our Bayes factors. Since the model has analytical solution, our simulations are going to be much cheaper than in actual practice and we can do a lot of them.

As a quick heuristic, reflecting some common usage, we will interpret BF > 3 as weak evidence and BF > 10 as strong evidence. If we do this, this is how our results look like based on whether the null is actually true:

We see that in the case of observing 20 values, this simple heuristic makes a potentially non-intuitive trade-off where low rates of wrongly claiming support for the intercept model, the maternal uncle of despair, are balanced by low rates of correctly finding strong support for the null model and by somewhat large rate of finding weak evidence in favor of the null model, even when this model was not used to simulate data.

This is just to illustrate the point made by Schad et al. that explicit calibration and decision analysis should be done in the context of a given experimental design and utility/cost of actual decisions. But wan can be safe in the knowledge that the poor null model is unlikely to suffer unjust rejections in this case.

Bayes factors are not very intuitive, but I hope that understanding that the same number can be understood as either being a ratio of prior predictive densities or from a larger model taking the candidate models as components could help improve the intuition. In line with the (better, more thoroughly done) results of Schad et al. we also observe that computation of Bayes factors cannot be taken for granted and that simple heuristics to interpret Bayes factors may have non-obvious implications.

Now go read Workflow Techniques for the Robust Use of Bayes Factors!